The Magpie is one of Australia’s familiar black and white birds that reach an average size of 36-44cm in length. Adult male birds have pure glossy white and black plumage whilst the females white areas are mottled a dusky grey. Juveniles are alike the females though the black plumage is grey brown in colour rather than pure black. Their sharp wedged-shaped beak is a blue-grey colour with a black tip and can cause serious injuries to the eyes and face when the Magpie becomes defensive during the breeding season.

Magpies inhabit a wide variety of habitat types including open woodlands and forests, scrubland, farmland and suburban areas. They exhibit a preference for open grassy areas surrounded by vegetation. They are omnivorous, with their diet recorded to consist of over 140 different food items which includes invertebrates, reptiles, amphibians, small mammals and invertebrates. They are also efficient generalists with scavenging off carcasses not uncommon. Magpies will primarily forage on the ground but if other birds are around will sometimes retreat up into the tree canopy to eat. 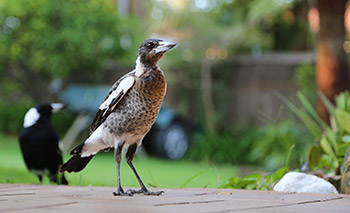 Magpies have a long breeding season in comparison to some other bird species with nest construction, egg incubation, rearing of chicks and fledging juveniles occurring between June and December. Nests are built high up in the tree canopy by the females, but where tall trees are absent the nest will sometimes be built in saplings and bushes. A ‘bowl’ is constructed out of dry sticks which are then lined with soft materials such as bark, grass and other plant material. It is not uncommon to see artificial materials such as wire, fabric, plastic, rope, baling twine and clothes pegs incorporated into the outer layer of the nest in suburban areas.

Usual clutch size is 3 to 4 eggs which are approximately 38mm x 27mm and oval shaped. Factors including the season, weather, animal health and predator presence can vary the clutch size. Newly hatched chicks are at first pink, blind and naked with large feet, long necks and a broad beak. Within a week the feathers will start appearing and after approximately one month they have a full set of feathers and are ready to fly. Studies have shown that there is only a 14 percent survival rate for chicks under good conditions, as species including goannas, snakes, domestic pets and birds of prey will predate on the young.

Magpies have become successful within suburban areas due to land clearing and construction which has created open spaces in once tree dominated landscapes. This in turn increases foraging opportunities. Hand feeding by residents, domestic pet food left outside and unsecured rubbish for birds to scavenge through also contributes to magpie occupation. Magpies are very territorial and will vigorously defend their nests against other birds, predators and humans. Attacks on people occur as magpies see us as just another intruder, they do not distinguish us from other animals and so they will swoop to try and scare us away. Birds which are overtly aggressive are the most cause for concern as they can inflict serious injuries to humans.

How can I deter these birds from my home? 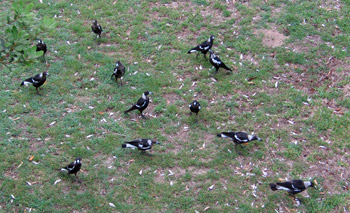 Only a small percentage of magpies will become aggressive during the breeding season though the intensity of these attacks will vary between birds. Common attacks occur from the back where the bird will swoop in and ‘snap’ its beak or even peck at the face and ears. Magpie’s rarely attack from the ground though it has been known to occur. It is important to remember that these birds only sense us as a threat when they have eggs or chicks are in the nest, and are just trying to protect themselves against what they deem to be an intruder.

All wildlife is protected within Queensland and any attempt to harm or remove animals without the correct permits and licences is illegal. This also includes tampering with nesting and breeding sites. It is important to remember that wildlife will take advantage of suitable conditions available to them when their natural habitat has been modified.

It is common belief that hand feeding magpies will encourage them not to swoop and become friendly though this is not always the case. Other birds will be attracted to the free handouts and more than likely become a nuisance within the area. Birds are also not evolved to digest the preservatives and artificial additives in our food so hand feeding can lead to sickness and even death.

If you know that a swooping magpie is in the area and there is an alternative route, take it. Don’t aggravate or attack magpies as this can lead to them becoming more aggressive and potentially cause serious injuries to another passerby.

Umbrellas, hats, eyespots and zip ties on the back of bike helmets or sunglasses on the back of your head can help in deterring swooping birds by preventing physical contact, and making the bird think you are watching them and therefore eliminating the surprise element.

Councils will usually erect signage and inform the public of areas where swooping birds are present, however if you become aware of an area which has not be signed or no information has been posted inform your local council.

Our licensed professionals can provide you with ecological advice and specialised trapping equipment along with the safe translocation of magpies. During trapping and through to their release every effort is made to ensure the welfare and safe handling of these birds. Release sites are pre selected prior to removal to ensure the habitat is suitable for their ecological requirements. All trapping and relocation of these birds is conducted in accordance with permits and licences issued by the Department of Environment and Heritage Protection (DEHP) and Animal Ethics Committee (AEC). These permits and licences are only issued where the knowledge and suitability requirement to manage magpies effectively has been met under stringent conditions.

Give your local swooping magpie specialist a call today on 0439 506 874 or you can email us at brs@qfc.com.au